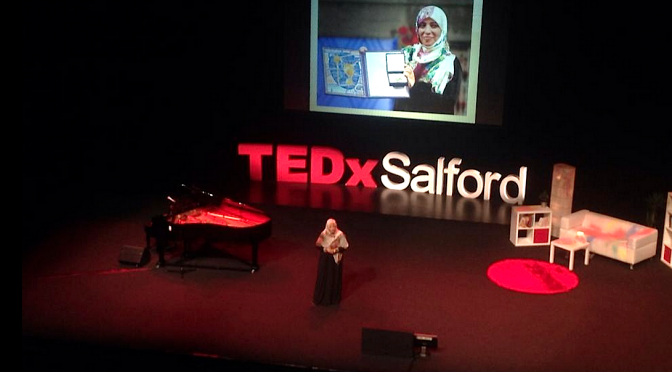 I bought my ticket as soon as I read that this Arab woman – a Nobel Peace Prize winner – would be speaking at TEDx Salford 2014. This was the woman who started a revolution in Yemen, the ONE country in the Arabian peninsula that I have always wanted to visit (my colleagues made it and have great photos of the qat-chewing men in the streets…hmmmm…while I was probably off gallavanting somewhere else or hanging about in Saudi writing during my breaks…it’s a hard life, choosing *where next* to go on holiday when you’ve got four months of paid annual leave). Sigh. I’ve seen much of the Middle East – Lebanon, Syria, Oman, Jordan, Egypt, Saudi Arabia, Qatar, the United Arab Emirates – and travelled over 24 countries worldwide, to date. But Yemen got away from me.

It was never quite the time, never quite ‘safe’ enough to go to Yemen when I wanted to. If my father was (and he was, initially) going to disown me for going to Saudi (it terrified him, until he realised I was safe, I had close friends both Saudi and among the expatriates; and I could bring home 18 carat gold and great adventure stories), well, the proposition of my going to Yemen would cinch that fact. I was told by my Saudi friends: don’t even think it right now. Al Qaeda had just bombed the American naval ship docked in Senaa.

I even examined the option of teaching in Yemen in 2010 and decided against it when the Canadian principal of an international school tried to recruit me and revealed upon questioning that he and his wife were leaving (no-brainer: not the time to go to Yemen). There is another part of me that has lived in the Middle East so long with the so-called risks and dangers, and I was in Qatar when the Arab winds of revolution swept across the region and my Saudi friends in middle class government jobs saw their salaries increased dramatically (to keep the peace), I could imagine that Yemen is likely reasonably safe if you stick to the tried and true…tourist hotels, the main souqs and no gallavanting around the best parts…villages outside of Senaa. Even to see Old Senaa would be a treasure. For me, it would.

But now it is less safe than ever, or so it seems, from so far away, from England where I now reside. My feet no longer dust the dunes of Arabia, and I no longer work in Saudi, or Qatar (I left Doha and the illustrious think tank, the Qatar Foundation, in 2012). I don’t have my finger on the pulse of the land…directly. I follow through my friends and former students who are scattered across the region, and they are my proxy. How I miss it. How I sometimes feel crazy when people could care less about the issues that burn holes in my heart. Syria. Palestine. Yemen. Egypt. All of it.

But my love for Arabia came back to me with the arrival of this woman, this incredible woman, Tawakkol Karman, when she walked onto the TEDx Salford stage at The Lowry and spoke yesterday.

She spoke eloquently of her struggle and triumph with the Yemeni youth to bring on the ‘rose revolution’ of Yemen, toppling the president…because she had a big idea, a big dream. And that dream is justice, human rights, for the women and men and the children of Yemen, and for us all.

My heart was in my mouth as I speechlessly and breathlessly watched and listened to this woman talk with her hands, as Arabs do. I understand intimately because I have lived among Arabs, specifically the Gulf Arabs, and some of my best friends today are Saudis, one of whom has a mother who came from Yemen. I’m not supposed to know that. But I do. I know she came as a young bride to marry a Saudi, but that’s another story. I know the ways in which Arabs feel things so passionately, they must express those sentiments with their hands, forcefully. I know the strength of those hands, and the love of those hands. I know the ‘hanan’ and deep tenderness and compassion of Arab women in particular. They are known for this. I also know they are rock steady; they have nerves of steel and we women in the West can learn from them and what they have suffered and still endure today. I have written songs about the wisdom of Arab women. I felt Tawakkol Karman’s passion. My heart yearned for the Middle East, a place I have lived for 13 years, in peace, in deep peace and harmony.

So, of course, I ran down the aisle, pushing politely past people who had no idea what I was feeling or where I was going. I found her, at the bottom of the Lowry Theatre, greeted her with my best Arabic, delighted in her warm and sincere character as I gave her my album Bakhoor a compilation of my own struggles and journeys through the Middle East, pre and post 9/11. She told me she loved the photos on the cover – my many photos taken over many years travelling – and told me that a man had made a song with her words. It’s not hard to see why. Listen…

You see, the story is all hers, Tawakkol Karman’s. I share it with you via the Nobel Peace Prize ceremonies. Today, the power of this woman steals my attention from everything else I have ‘on’. I called a Saudi friend who told me Tawakkol has recently lost her home in Yemen to the rebels who would love to topple her for promoting peace among the Sunni and the Shia…and among men and women…among people of all faiths and people who have none.

The power of this woman and her faith in a better world to come leave me humbled and heart full. She may be Mother Yemen, and maybe the Mother of Us All.

And worth watching…the entire 2011 Nobel Peace Prize Ceremony and acceptance speech of Tawakkol and the two other women who shared the honour with her.