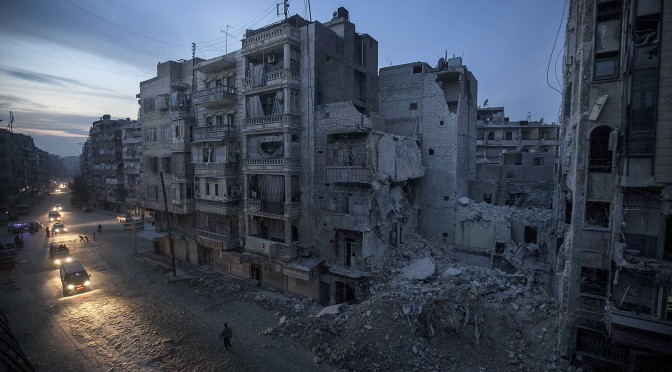 I’m an English teacher. I taught English in the Middle East for thirteen years, eleven of them in Saudi Arabia and two in Qatar. I have travelled all over the region, barring Iran, Iraq, Afghanistan, Yemen and Palestine/Israel. Sadly, circumstances have prevented me from crossing over the borders to reach the people of these countries within their own native lands, though I’ve met many of these fine, impassioned, complex, simple, highly interesting people in Saudi Arabia and Qatar especially, as well as in the UK and elsewhere while travelling, of course.

I have been to Syria in peacetimes, and realise it is a lost world – that. It’s heartbreaking. Today I find myself the English teacher of a British-Syrian young man who is proudly Syrian but equally British in that he has been affected by peers around him. He straddles that line that isn’t quite what some insinuate is ‘Half Caste’ in one of the modern English poems I have studied and taught in this country about the plight of a poet coming from ‘mixed bloodlines’; both of this lad’s parents are Arab. So, he’s not fully Arab anymore, and he’s not a native British son. He has adopted the norms (good and bad) of his homeland with a similar passion he contains for the place of his upbringing, which is now in shambles today. The joy this boy, this young man, exudes (probably because of the appreciation for what he now has) saves him from the cynicism and ‘disaffectedness’ of some of his Born In England British peers. And while he has failed his English GCSE (a major course/qualification needed in the UK…for jobs and entrance into university), he’s forced to sit and try to pass the course again while in Sixth Form College, a halfway educational process between traditional high school and university or real college. He’s trying. One of his peers escaped down a stairwell and was removed from class and college. Oops. Oh, well. I inherited this lovely young man, and two others, two months ago as my first ever Year 13 English student. When we met, I liked his attitude and enthusiasm immediately, even if he was like a lost son.

He would stride in early some days, late others, and not at all…once. Mostly, J. was there, eager to learn. Until he had to work independently. The boy-men burst into giggles then, all three of them, and this one was childish in spirit, and something in me envied him. Oh, to be young again. Oh, no. I watched him crack up and thought: he is malleable. Can I get him there? I was sure going to try.

His enthusiasm waned at times for the work of GCSE English, or IGCSE English, to be exact, but he never give up. Though if I had seen an inkling of ‘giving up’ the idea that he could and would pass this course, it came with my attempt to get the students in that class to do what is called a Speaking and Listening Assessment worth 10% of the course – enough to sway a grade from a Fail to a Pass, or a Pass to A Better Grade. My boys’ eyes rolled when it came time to independently write a speech giving a preference for vegetarianism or not, after watching some mighty disgusting videos on the treatment of farmed pigs, turkeys and cows, I thought: here we go. Let the games begin. They rocked in their chairs, could not sustain silent writing (or thinking) for more than a minute or two. That was several weeks ago.

The mission was clear: ensure that the boys took this seriously, wrote a speech each, prepared to deliver it and did so with as much gusto as could be mustered in lads who swaggered into class, not always ‘there’. Two, including J., liked to talk while the third poked away at his iPhone as I watched and, like a hawk, caught him out. At the end of a few days of this, I realised: these are big boys. I am going to call home, once, and then it is up to them to do the work. I’ll be there for them, give them every chance to get extra help, but in the end – as I told them – it is up to them. It was up to them.

It must have mattered. The topic was, for this one Arab young man who knew his roots somewhere inside of him: ‘Why Bashar Al Assad Must Leave Syria and Why the Syrian War Must End’. He struggled to organise and days went by. Since I only had the boys for two days a week, weeks went by. Finally, we were into the last two weeks of prep before the Speaking and Listening Assessment – the exam. Boom boom…the thud of my racing heart. I could feel it.

I had pushed J. who was impassioned but who could talk ad nauseam in generalities. He had spoken to me of what was happening in Syria. He didn’t need to tell me about the rapes and killings and isolation of the people and the pushing out of Syrian citizens of the wrong ethnicity or background or political sway into refugee camps and, of course, the ongoing clutch to the rein of terror that this President Bashar Al Assad has while, now, the situation is riddled with corruption all around. I knew. I told my student, my big baby quickly growing more keen to prove himself, “Get evidence. Don’t forget the evidence.” Don’t forget this, that and the other.

He did. He came back with nothing, so I put a laptop in front of him in the library. The other two boys examined the merits of paying the likes of footballer Wayne Rooney the equivalent of £42,000 per day to kick the ball around. I like watching Rooney, to be honest. But I’d like his salary more, for a lot of reasons. What I could do with £42,000 – finish my master’s degrees, sooner, feed the needy in a charity of people facing extreme poverty, take a holiday – lord knows I need one. My J. worked away at his speech on Syria. I helped him and the other two lads outline their essays/speeches and told them, “Now, go do it.” They didn’t.

One created his PowerPoint the next day, and never used it for real. I sat J. down again and recognised his tendency to operate as I do: better under pressure. He began to scribble out his speech.

He came with a printed version of this the last day before the presentations were due. I pushed him, again, to go home and add evidence that we looked up together. I proofed his English; he had a few common errors, such as missing out the verb to-be.  I asked the questions, he found the evidence – statistics from Médicins San Frontiéres – and that was when I was reminded that kids who have someone…benefit from that coaching, prodding, mentoring, support. Kids who don’t enjoy that, struggle more. It’s unfair. But it is what it is.

Our lad came back to me the next day, two days ago, ready and swaying with excitement. Still, the cue cards were not done! Arghhh. He had time. I sent him off to sort his own problem out and he quickly found some stiff coloured paper and cut and wrote his cue cards. I had already decided: I would not go to watch. I would let him stand on his own two feet. He had cracked up in front of me, in class, laughing, to the point where I wanted to laugh and did – with him. Empathy is a good thing. His innocence at 18 delighted me. A future construction worker, good with people, good with his hands and with practical things, was about to step over the abyss and give a speech on a topic that mattered to him: Syria. What’s not to love?

He passed with flying colours. In the UK, 37 out of 40 marks for an Oral Speech is an A. This is extremely hard to get academically and I have been floating with joy for J., thinking about this important message he delivered. I heard the speech in its evolution, and he went from an inarticulate young man to a defender of the right for peace in the country of his upbringing. How proud he was…of himself. And how proud I was of him. He was jumping for joy to go home and tell his father that his stories had been passed on, and to tell his mother he had done it – without her help, for she was fed up with helping him. He’d blown a lot of chances. She has her own thriving future career in fashion to worry about. Love sometimes means tough love.

J. ran out of the school with a promise to me and himself that he would celebrate getting this massively good grade and that’s when it struck me: what matters, matters. And what matters gets done, I’ve decided. It just does.

2 thoughts on “What Matters Gets Done”