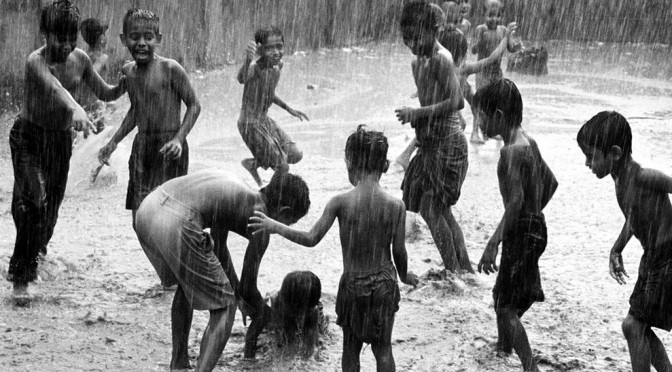 This is a gift worth saving and sharing on with a friend. So, I’m doing it here and now for you. Will you share it with someone you love?

There is sadness in the world today. There is never enough money, time, love, joy…and the examples are many.

I know a sensitive boy who misses his home and his friends. There is nothing his parents can do. They do what they can and this doesn’t change the fact that this boy, now a teen, soon to be a young man, misses his best friends and the sense that he belongs somewhere. His home is where he is not. It is anywhere but where he is. As a long-time traveller, expatriate and now migrant, I understand the feeling. You feel trapped, and you are, in your mind and for real.

Without money, you’re stuck. Without rights, you’re stuck. And without question, someone else controls the pathways all too often in our lives. It is easy to give up and fall into despair. Easier than considering: some have it worse.

The greatest international sporting event is on again, and the winter Olympics in Sochi, Russia are mired by the fact that President Putin has declared it illegal to propagate ‘nontraditional sexual relations to minors‘. The human rights of a significant part of Russian society, not to mention tourists, are endangered before the world’s eyes. The moral debate in my workplace this week was: should we live and let live, or should we care? 90% of the participants having that discussion put their hands up indicating that we should care. Still, words are cheap though the world has changed in the past twenty years. ‘Gay’ is no longer the major put-down it used to be in the western classroom. Yet we have this dichotomy of presidents making it illegal for minors to even learn what the word means. This Guardian News article reminds us that in Nigeria and the country I lived in for 11 years, and loved, Saudi Arabia, the consequences for being openly gay are so much worse.

It’s hard to believe that, after the lessons of WWI, WWII and the Holocaust, Apartheid in South Africa, Slavery in America and the examination of modern versions of apartheid in Israel and elsewhere, corruption and famine across Africa, war in Syria (a country I have travelled through and loved in its former incarnation), poverty, abuse,  ignorance, lack of educational access in every large city I’ve ever known, oh, and every small town, too…and then extreme poverty in many, many parts of the world…

It’s hard to believe that we still have human trafficking, drug corruption, the Taliban, the Afghanistan government making it illegal to report the rape of women, the squelching of women’s economic rights everywhere with the failure to understand that families including men and boys suffer, too…

There is nothing left of our innocence. Or is there?

Delight in the innocence. It still exists. Everywhere.

Kayden + Rain tells us so.