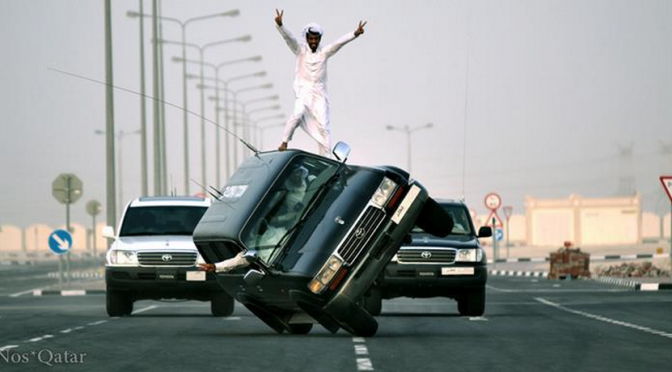 Driving home from a long day today, in a foreign country, in a ‘new-ish’ job, five thousand miles away from where I was born and grew up, I felt numb. It was a long day. Difficulties had come from all directions. People were my primary source of stress and, internally, I was boiling.

I learned first thing in the morning, from a former colleague I’m connected to on Facebook, that a former student of mine died in a car accident…in Qatar. His father is a supremely prominent member of the Qatari royal family. The world knows him even if they don’t. Even that will not afford you protection from your end, if that is what is meant to be.

The boys were driving at high speeds, one with a belt on, the other with it off. The back seat afforded no protection and…Jabber died. I don’t want to imagine the body…of this boy I used to laugh with and talk to in my Personal and Social Education class…flying through the window. It is too much like a boy I never knew in Saudi Arabia who died in a crash at high speed on the way to school: 180 km/h on a winding, mountainous road. One of the other boys in the SUV, a former student of mine, survived, thankfully, but he was one of the ones who helped lift the wreck off the body of his dying schoolmate. It changed Ahmed, forever. It tempered him and stole his innocence. His life could have been snuffed out, too, in that instant. He would never see ‘joy-riding’ the same way, and I know that because he told me so. That, nearly a decade ago, was hard enough. I still ‘see’ the storyboard of that horrible day and the week after in my mind’s eye if I think about it, which I try not to. How do you live with tragedy when you cannot forget?

Tragedy is not something you erase. You learn from it. You let it transform you. Slowly. Deeply. However it does. Because tragedy requires the capacity to forgive. Self. The perpetrator. The circumstances of life. Forgiveness and gentleness with the self is the only way to cope with tragedy, for it strikes like a long sword through the heart when it comes. It takes its sweet time, drawing out the pain.  You need to go with it and sometimes you simply cap it, like I did tonight when I allowed myself to be enticed to an art exhibit and a half pint. This is Britain, after all. It was helpful, but the numbness dies away. It always does. The pain comes back. Alcohol is no solution, not that I ever thought it was – I am the rare drinker – though one half pint was enough to mellow me from talking too much and thinking too much about the ways in which societies are both ‘grown up’ and ‘adolescent’.

Instead, I gazed at the artwork of a man and a woman playing with lace, strips of gauze and power. It provoked a light critic in me. I talked to the local artist who had made this piece called Un-Veiled, very western in its interpretation of ‘the veil’. In the process of discussing how this creation had come about, we had a laugh, even though my heart was broken. It’s the process of making meaning of the senselessness that brings comfort, according to Victor Frankl, who survived the Holocaust. That’s what you do when tragedy hits.

I have this uncanny ability to find music that serves me in some way to heal. I listen to the same song over and over and over and over! Once I listened to Vonda Williams’ song Maryland for three hours straight while driving from Edmonton to Calgary, Alberta, Canada. Two days later, my very best friend left me because – I still don’t have an answer.

The song was a reflection of my life then. Songwriter on the road, restless for new horizons and crying inside for a familiar place to stop and recover from the journey of living hard at times.

Oh, the memories, the dreams. They mix to become a strange cocktail of the past with future lifting the present to the fore. I wonder what Arabic song will be the foil for this current tragedy. Silence will be the answer. The music will stop.

Arabs don’t give flowers, either, when a loved one dies. It would be considered macabre. Instead, the community comes to the family who sit for four days, serve tea and coffee, and receive condolences and comfort from the presence, concern and shared prayers of others. The body of the loved one will have been buried within 24 hours of passing. The rituals of death help prepare the winter gardens of our minds to grow again, when we thaw and the cold has eased some.

Tragedy does, indeed, change us. It should. It should waken us to contemplate more deeply, to listen to and heed the twinges that deep scrapes and wounds expose, so that we make the choices we really want to make in life.

What these wounds teach you is raw, and hurtful but capable of transforming your heart and mind. Can that be healing enough for now? Of course. To honour our loss, it must be.