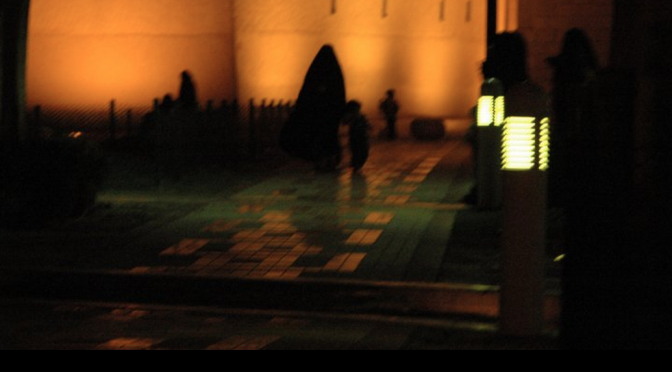 Subscribe to this blog (green button on right) to receive notifications about the memoir I am working on. Be the first to hear the stories of my remarkable life in Saudi Arabia during the 9/11 era.

“Hello,” I said, as I climbed onto the back seat of the truck, everything loaded.

“Sala’am!” the Saudi said, with a smile and a friendly burst of energy. A craggy man of about forty, he started the engine, waved off several African boys with rags who wanted to wash our tires, and we pulled out of the lot.

The rows of palm trees on each side of the exit ramp leading to the freeway kissed an overland breeze. They made for a spectacular arrival into the city of Jeddah. A sign pointed out the terminal for pilgrims coming in for Hajj. More ocean waves. They were open-air canopies, numbered. We passed the King’s personal gate to his royal terminal. His portrait hung high above it.

For the next half an hour, or seventy five kilometers, to the edge of the city limits, the driver proceeded to weave in and out of traffic with the best of them while I feared for my life. Every time some fool tore up along the left side of the median—one set of wheels almost in the ditch, the other set on the pavement—I clenched my jaw and gasped inwardly. Then reached for a seatbelt I could not find.

We sped past industrial slum initially —greasy supply stores and auto repair shops with no semblance of order inside, small and dirty fast food hutches, the occasional factory: cold beverages and gold. My head pounded and I was dying for sleep. But on the major thoroughfare, the highway to Mecca, I was riveted by the sight of gas stations hosting two to four rows of eight pumps. Behind every gas station was a mosque. Beside every mosque, a strip mall with the usual amenities plus Bedouin pillows, carpets, and camping goods.

There was little to say, for neither the driver nor I spoke the other’s language. However, he asked if I was “Amerikee?” and I said, “No, Canadian” to which he replied “Oh, Canada…very cold.” Yes, very cold. Approaching a second gas bar, the driver gestured to ask if I wanted to stop for a drink. I said no and thanked him. We carried on.

We were coming up to a junction, which clearly marked two diverging roads: one for Muslims and one for non-Muslims. Turning onto the unlit highway, we veered away from the checkpoint and soldiers stopping all cars entering into Mecca…and headed towards the open desert.

The man in the moon cast a watchful eye that night. And mother earth rose in all her voluptuous glory to greet him. This was not a patch of flat land. It was nature’s bosom. This was not dry sand. It was sacred ground of magnificent proportions, thunderous and silent. I gazed at the shadows of mountains that unfolded over the distance—they stole my vision like a silent movie—and asked myself: What am I doing here? What aspirations do I honestly have that stack up against the boulders which grace this land?

I could make out little on the horizon except for the moon, the stars, and the occasional fire in the desert. The blue separations of those mountains brought home to me the distances I would travel. The people I’d left behind were so near and yet so far.

I thought about them and cried.

I’d walked away from a woman’s group which had met monthly for two and a half years and a clutch of friends well versed in art, dance, theatre, music, literature, psychology, philosophy, and politics. Why? Because although it felt like being ripped from the womb, I knew there was only so much space I could occupy in that collective embrace. It was too safe, too sheltered, and it was time. This was not a conscious bidding.

I searched the highway for some measure of what was to come. A truck pigged by, its lights a streak in the night. I looked again to the mountains for an answer. There was none. As the distant layers of rock threaded into a thin line, I leaned back, closed my eyes and imagined a gigantic heart beating—then slept.

With a wicked bodily jolt, I woke to see the sheer face of rock coming straight at me. Then the driver pulled another turn. And another. Still yet another, as he criss-crossed over the yellow line in an effort to avoid the cliff and the string of cars racing down towards us. “Where are we?” I croaked, quickly scuttling to upright position before the urge to vomit manifested into reality. The driver said nothing. The air conditioning was off. The windows were open. The guy was half-asleep, it seemed, as the next bend nearly met us head on.

Not a second after that, a car pulled out of sequence in front of us, forcing both our pickup and the leading car of the pack ahead to squeeze to the edges of the road. The bastard barreled through with no regard for life, his or anyone else’s. I couldn’t believe it, until it happened again, this time from behind.

Over my left shoulder, a car was gunning it and moving up along the opposing lane. He passed and my driver whipped to the right as the next wave of oncoming traffic screamed around the bend towards us. The guy tucked in front and came within inches of clipping the front fender. We came within a foot of bashing the cliff.

From that point onwards, my internal radar was off the Richter scale as I sat on guard to make sure that the Saudi in front of me kept his eyes open and his wits about him. I measured distance by the curve. Just one more. One more. One more. Breathe. The air was cooler at altitude. I gulped it in. The lugging of the engine synchronized to the voice in my head willing us to the top. Come on. Come on. I cheered every time we managed to find a stretch of open road, grumbled when the traffic in front of us blocked the way, raged every time some fool put our lives at risk. The driver hummed a prayer under his breath as he shifted gears.

In the distance, the lights of Mecca pitched an immaculate glow across the desert floor. Where the “Christian” road had merged with the Mecca highway, the thing leading up to the base of the mountain looked like the lights of Christmas. Above us, a sign for the Sheraton Hotel signaled the end to this misery.

We passed a tow-truck parked in a stopping lane and, after countless more bends in the road, we passed another one and crossed a bridge. The road split into a double lane highway. By this time, my guts were swimming. Graffiti, street lamps, and emergency call booths along the side of the road marked the return to civilization. Almost there, an erratic display of vehicles pulled over hodge-podge drew my attention. I squinted at the people feeding a frenzy of baboons from the windows. The monkeys looked wild and vicious. A female with a baby affixed to her back stole across the road with a banana in hand.

We cruised by and, within moments, passed several roadside fruit and vegetable stands and a military checkpoint. The worst was over. We were at the top and I was never more grateful for flat land. I sucked in and exhaled several breaths.

Two minutes later, at three-forty a.m., we pulled up to the hospital compound that housed my school and living quarters. The name of this Saudi military establishment emblazoned the sky in neon lights. Flowers, palms, and a water fountain were the only signs of life other than the gate guards on duty. The driver made a phone call and proceeded to drop me off first in front of Building 23—where a Filipino woman stood, rubbing the sleep out her eyes, waiting.

“Hello, Lorelei. I’m Josie, the house mother.” She took hold of one of my suitcases. “I will show you to your room.”

“Nice to meet you,” I said, glad to be in the company of a woman and an English speaker at last. Josie didn’t bother to reply or, if she did, I never heard her. I said nothing more and followed her down a carpeted hallway, through a set of fire doors.

2 thoughts on “The Memoir”