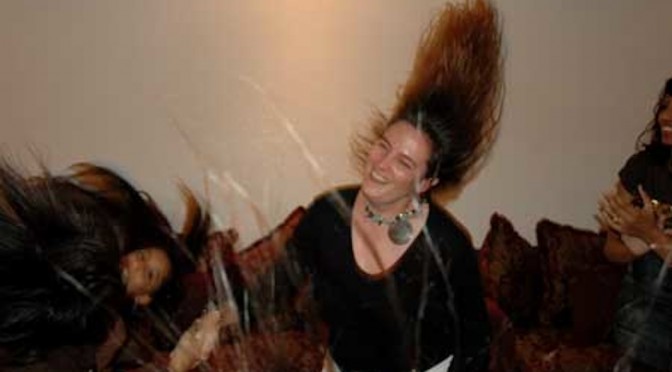 Listen to the Bakhoor sampler: Lorelei Loveridge is a published songwriter, recording artist, performer, world-traveller, teacher, activist, arts manager, coach, consultant, writer, photographer, director of theatre, marketer, and jill-of-all-trades in the wonderful world of art and music making. She originally hails from Edmonton, Alberta, Canada, has lived in the UK and Qatar, and is now back in Saudi Arabia for what has been a total of 16 years – 11 from the period of 1996-2007. Loveridge’s music has been played by radio DJ’s as far and wide as India, Bhutan, Qatar, Canada, the US, the UK, Denmark, and Greece.

Loveridge is the founder of Performing Songwriters United Worldwide (PSUW).

Canadian artist Lorelei Loveridge lived for 11 years in Saudi Arabia, pre and post 9/11, and loved it. She experienced religious zealots, compound invasions, a terrorist chase, earthquake, tsunami, war in Lebanon, crazy drivers, nutty expats and more, and survived to tell the tales in story and song. Her physical, personal, and musical journey is documented in Bakhoor, a 4-year, 15-song album project recorded in India, Canada and Saudi Arabia. It features some of the finest players from across the globe including Brian Hughes (producer of Loreena McKennitt), Harry Manx and Lester Quitzau.

While “Home is Where the Heart Is”—a song about the pain of a mother and her Palestinian daughter—is the first single off of the album, U.S. songwriter and 35-time Grammy award-winning guitar legend Dick Wagner said this of Loveridge and Bakhoor: “Her vocals are hauntingly emotive, her songs are beautifully structured folk/pop creations and her musicians are world-class interpreters of her musical vision…The brilliant ‘Oh, India’ sets the tone and atmosphere for this musical journey…a journey you won’t forget. I personally love Lorelei’s music and recommend it to all seekers of sophisticated yet accessible music.”

What others have to say about Lorelei Loveridge and Bakhoor

“Like the fragrance of foreign lands, the most memorable quality of the album might be the intangible social insights that seep out from between the lines of Loveridge’s songs, on top of the potent images and stories she has woven into this entertaining travelogue…Despite the entrancing music, the greatest strengths of Bakhoor might be in the storytelling. Loveridge was in a unique position to observe the overlap of eastern and western cultures, clashing religious beliefs, rich and poor, terrorism and war, and documents the humanity with an acute vision.” – Roger Levesque, Edmonton Journal, Canada

“A 15-track opus. Wow, this gal gets around!” – SEE Magazine, Edmonton, Canada

“Beautiful. Fantastic CD. So listenable, there’s so much in it. The front cover is fantastic: 36 small pictures. Every time I look at the CD, I’m seeing something different. They’re telling me a story. Oh, India is my favorite. I’m just so envious of the life she’s led. ” – Ali O’Brien, ‘Ali O’Brien’s Sounds of Folk’, Oldham Community Radio, UK

“Lorelei Loveridge’s gig at the Blue Chair was phenomenal! She is one of the best storytellers around. Beautiful voice, her song writing is spectacular and the patter between songs both heartfelt and enlightening. In all, just a mesmerizing performance!” – Sarah Pocklington, Asani, Award winning Aboriginal women’s vocal trio, Canada

“Finally Lorelei Loveridge, our visitor from Canada, entertained us royally with some from her latest album of which I Need To Go and Home Is Where The Heart Is…were outstanding.” – Don and Heather Davies, Sale Folk Club News, UK

“Wow!! I’m sincerely enjoying these songs and can’t believe how well she tells a story in the lyrics. It’s clear she’s actually spent time in some of these places. Lived it. Not just travelled through in a 5-star.” – Daniel Thompson, MyExpatRadio.com, Dubai, UAE

“A female version of Paul Simon insomuch as experimentation, openness and confidence in her music as well as musical ability. I think she’ll go far!” – Ursula, ‘The EXR Unsigned Show’, 96.9 FM The Real Voice of Manchester, UK